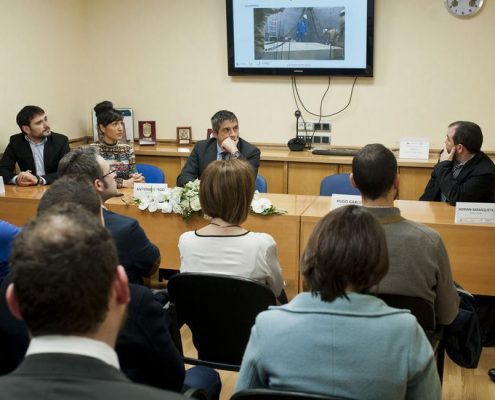 In the program other Galician firms participate

The Company Gabadi specializing in naval accomodation, leads a research project aimed at designing a gas tank with membrane technology that could be used in smaller ships than those who currently in use and also in satellite plants. Liquefied Natural Gas (LNG) is the main source of fuel for maritime trasnport, and the tank than foresees to develop the company in partnership with other firms could be used in ships that use conventional fuels and want to adapt to use LNG

The initiative has been named LNG Prototype Pack and will be funded by the Galician Innovation Agency (GAIN) through the Conecta Pyme program, with funds from Feder and the Department of Industry.

Gabadi participates in this project with another firm also partner of Aclunaga, the technological Vicus DT, as well as NEO-CH4 Galicia and Innova Labs. In the morning the project was presented, coinciding with the start in the construction of the prototype. The forecasts indicate that it will be finished by the end of next November, in a Coristanco company that has provided its facilities for this purpose.

Antonio Llago, Gabadi’s manager, said the future membrane tank could be used to replace those currently used in LNG satellite plants. Hugo Garcia, director of Operations of the company, said that although shipowners have other alternatives to adapt their ships to the emission restrictions imposed by the European Union, these are more expensive than the proposal with this project. The presentation of the initiative was attended by representatives of several Aclunaga member companies.

Gabadi has a high specialization in the naval and gas sector. In 2015, the European Organization for Nuclear Research (CERN) ordered commission the construction of a cryogenic storage tank for LNG.