The company signed an agreement with the Korean enterprise Hankuk Carbon, for the gas carriers sector 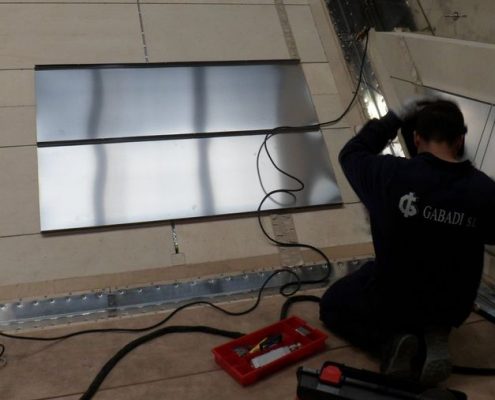 The Galician company from Naron, Gabadi S.L., which is specialized in the naval outfitting and gas carrier sectors, moves straightforward in its expansion at the Asian market. After creating a joint venture in China, through a partnership with the local firm Aojiheng Offshore Engineering, as well as being awarded important contracts in Singapore (among others), it has already sealed an alliance in South Korea, which is the leading world power, when it comes to naval construction. It has joined forces with the company Hankuk Carbon, which manufactures thermic insulation for the liquated natural gas sector (LNG) and electronic substrates for clients, such as Samsung, in order to work together at the bunkering market, which consists on the carrier to carrier fuel supply of LNG, both at small and medium scale.

Gabadi is currently executing methane carrier repair in Singapore. It became the first company, not being a shipyard, in being granted the license by the technologist Gaztransport and Technigaz, for the construction and repair of its membrane tanks for gas carriers. The Galician company has been combining its experience in the shipbuilding sector, with the gas carriers field of expertise, what has allowed it to awarded important projects to perform repairs at several international shipyards. In fact, it is executing the repair of a gas carrier at Keppel Shipyard in Singapore, for which dozens of workers have been allocated.

Gabadi and Hankuk Carbon are confident that their forces being joint shall have a multiplier effect, to obtain new contracts, related to the LNG bunkering, in different geographical locations, such as USA, China and Europe.
“With this agreement, a new solution is offered, due to the combination of the LNG insulation manufacturing technology from Hankuk Carbon, with the membrane tanks installation technology from Gabadi. Without a doubt, we will occupy a dominant position, owing to this cooperation”, stated Antonio Llago, CEO of the Galician company.